More from the Holiday Snaps and Sunsets Department… Its nearly two months now, but I paid a quick visit to Kerala to catch up with some friends who were visiting back before Christmas.

First it was a couple of days in Varkala – a popular hang resort amongst backpackers – and then it was on to a boat trip through the Kerala backwaters.

The backwaters are a network of brackish lagoons, lakes and canals on which you can potter about in a converted rice barges. With rice farming, fishing and some tourism, there’s actually quiet a population living out amongst the lakes. Might have to get myself a canoe, but expect I’ll be back to explore.

As it happened, before heading back to Madurai from Kochin (Kerala’s largest city) I managed to catch an air & sea show by the Southern Command of the Indian Navy. No sign of India’s newest aircraft carrier, but they still managed to blow stuff up and show off some of India’s finest military aircraft (with names I don’t remember of course – apologies plane-spotters). 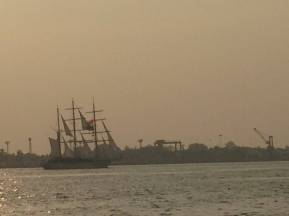 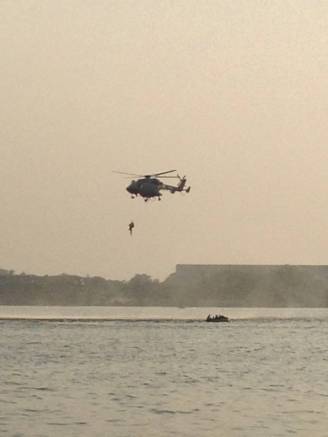 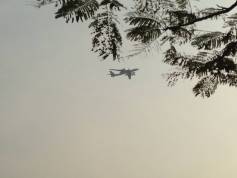 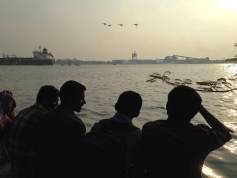 One for the history buffs… I took myself on a slightly less travelled sightseeing trip around Chennai at the weekend – poisonous snakes aside, it’s hard to beat a scorching afternoons in the tropics exploring graveyards…

First, I paid a visit to the Madras War Cemetery – resting place for several hundred Second World War casualties. Although it didn’t see much frontline fighting during the war, many injured would have been evacuated to India and on dying here would have been buried locally as was the norm at the time. 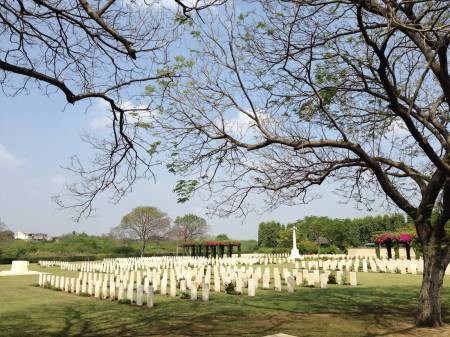 The cemetery – maintained by the Commonwealth War Graves Commission and the Indian Government – also has a memorial to First World War casualties buried elsewhere in India. That includes as you’d expect casualties from several Irish regiments.

After that, it was a trip to St George’s Cathedral – previously the Anglican cathedral of Madras, you can tell there’s two hundred years of South Indian history here.

As you often see in older churches, the walls inside have a large collection of memorials to many of the Great and Good of pre-independence India. It would seem at least that travel in these parts has gotten a whole lot easier since Victorian India. 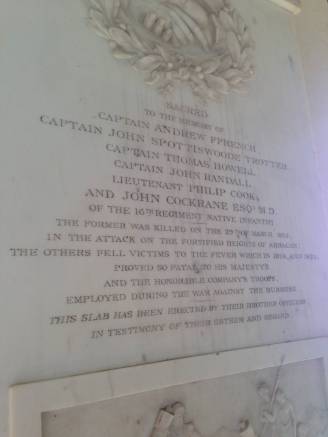 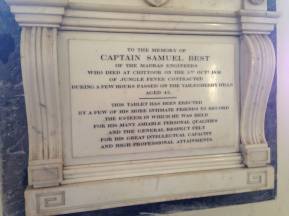 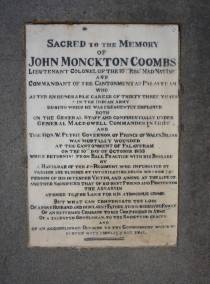 John Monckton Coombs
[…] Was Mortally Wounded at the Cantonment of Palaveram
[…] While Returning from Ball Practice with his Brigade
By a Havildar of the 5th Regiment who Infuriated by
Passion and Blinded by Intoxicating Drugs Mistook the
Person of His Intended Victim, and Aiming at the Life of
Another Sacrificed That of His Best Friend and Protection […]

Don’t worry, not all the headstones were quiet as grim.

After that I went looking for St. Mary’s – another old pre-independence expatriate cemetery. I’ll skip on a very odd detour to a similarly-named corporation cemetery for Christians in Chennai. Still a working cemetery, suffice to say I don’t think they don’t get many lost looking European visitors.

When I found it though, my intended St Mary’s looked like overgrown and out of use cemeteries everywhere. 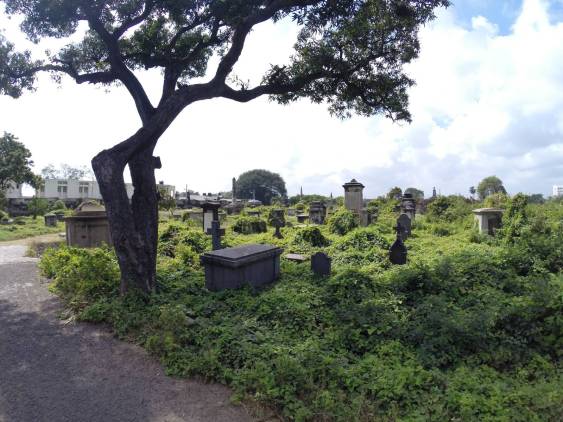 There were some well-kept war graves though, including some from the First World War. A long way from home I did find the grave of one Private Coughlan from Dublin. 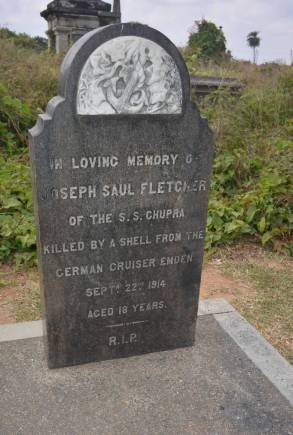 And that’s all from Chennai for now – back to slightly more travelled paths next time round… perhaps.

Its not every day you get baton-charged by police between turns of scurrying from tonne-weight bovines. Can only mean one thing – Jallikattu! 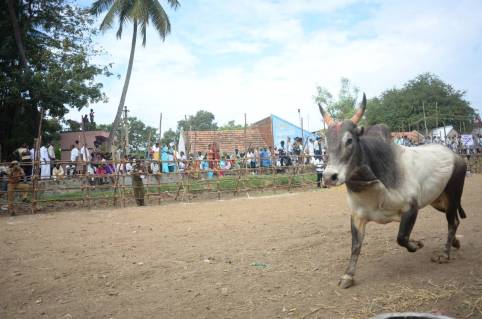 The season for Jallikattu – or bull taming/bull wrestling – restarts in Madurai every year at Pongal. A Tamil rodeo of sorts – villagers from all over Tamil Nadu descend on the Madurai district to be pitted against specially bred bulls.

One of the first major events of the year then is the village of Palamedu (pop 8,187) 25km north of Madurai.

A special breed of semi-wild cow – the pulikulam – is usually found taking part. There were 500+ bulls involved in Wednesday’s competitions. With a long history of shenanigans, in the last couple of years authorities have started a new regime of checking the animals (and competitors) over – so even the bulls have to queue. 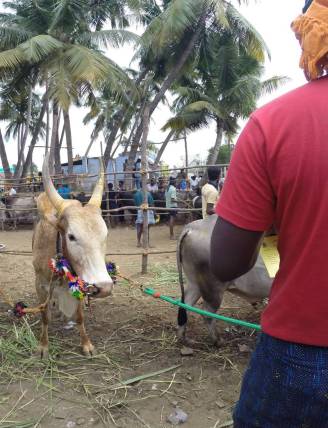 With schools and most businesses closed for Pongal, Palamedu overflows and getting close to the action requires some maneuvering. Although there were plenty of quieter spots further down the track for families. 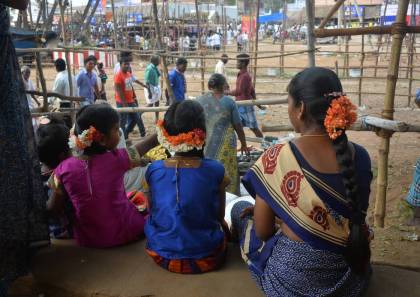 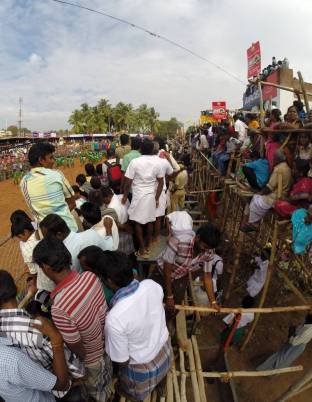 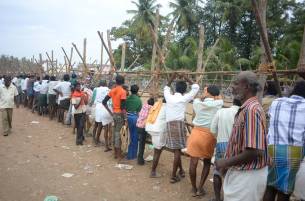 The bulls enter into the arena from the door at the right of the pictures. Tamers, to win have to grab and hold onto to the bull for a particular distance or time. There are also prizes as well for bulls who – presumably – put on the best show.

The horns are very real by the way. While they are no longer specially sharpened as was done in the past, that still didn’t stop 40+ tamers needing medical treatment. Police in the arena wear stab vests – not so the tamers. 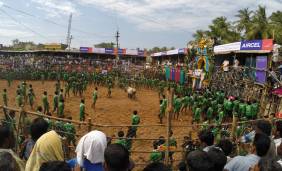 Of course, this is not all without controversy. While ongoing tussles between animal welfare activists and the various central, state and Madurai administrators have brought about, it would seem, much needed regulation, the future of Jallikattu is uncertain. The Indian Supreme Court has gotten involved and while not calling for a ban yet, is said to be keeping a close eye on things.

When all is done, the bulls still have to be caught by their owners and this often proves easier said than done. This year several bulls escaped the arena – including one who fell into a well.

But for the winning bulls at least, there’s a garland and no doubt an extra helping of rice straw before bed. 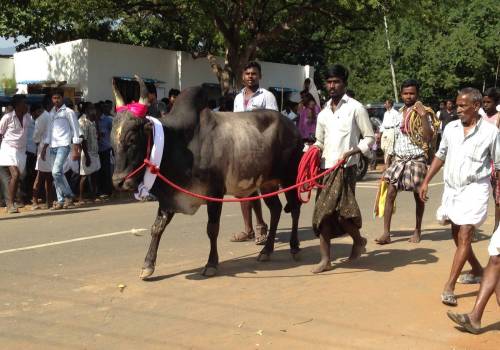 Lastly, let me wish you all a belated Happy Pongal – farewell from Palamedu!

Didn’t quiet know what to expect when I got invited along to the local school’s end-of-term Pongol celebrations (*1) – certainly didn’t expect to be among the guests of honour nor to have hundreds of cheering middle and high school students welcoming us into the school grounds. But you know, I can handle being a celebrity for a morning!

First off a Silambam demonstration from the students – this is a Tamil weapon-based martial art – teenagers with big sticks and sharp swords – they were having a great time.

Of course the guests of honour were expected to give it a go – less said about that the better. Not to worry, the Visitors vs Teachers Slow Bicycle Race would be a chance to salvage some pride… hmmm… thanks to Class 10’s Tamil language teacher, maybe not.

It was on to judging the Pongol making competition after that – not before signing autographs for half the kids in Northern Madurai of course – with a fountain pen – beat that One Direction!

Pongol is the sweet rice dish that gives its name to the upcoming festival – seeing it was my first time to try it, not quiet sure how I ended up on the judging panel – especially with it such a tight competition. I will say though that I while I was very fond of Class 11’s pongol, in the end it was Class 8B that pulled it off – congratulations girls!

Given how traditional it is at this time of the year, Kolam & Rangoli drawing (i.e. house-front street drawings) were also part of the competition – even the staff got in on the act…

Rangoli at the school’s entrance

So, we finished up then with presenting the prizes and everyone got a half day off school after that – even the celebrities. So btw, if anyone from Narayanapuram is reading – thanks for a great day!

*1 – Pongol is a Tamil Thanksgiving festival and probably the biggest festival all year round – it kicks off next Monday/Tuesday (Jan 13/14th).

It was probably just fuse board problems, but the relief when the early morning temple music didn’t kick in until 7 am this morning.

Maybe it was that some of Hinduism’s 33 million gods wanted us to hear the sound of rarely-heard falling rain?

At least only a week left to Margazhi anyway…

So, my return trip to Madurai (back to school Monday here too!) took me through Chennai for the first time.

First impressions? It’s a city that’s hopping. Now, you can hardly do one of the world’s largest cities justice in a mere 24 hours, so instead I just went to the seaside…

As urban beaches go, Marina Beach is big, very big… so big, that Chennai police estimated 1.8 million people were here to welcome in the New Year a few days ago. It was a little quieter for my visit.

In Pondicherry – the formerly French territory on the Bay of Bengal – for a short break. So, with the sun setting on the first day of the year here, I’ll wish you all a Happy New Year! 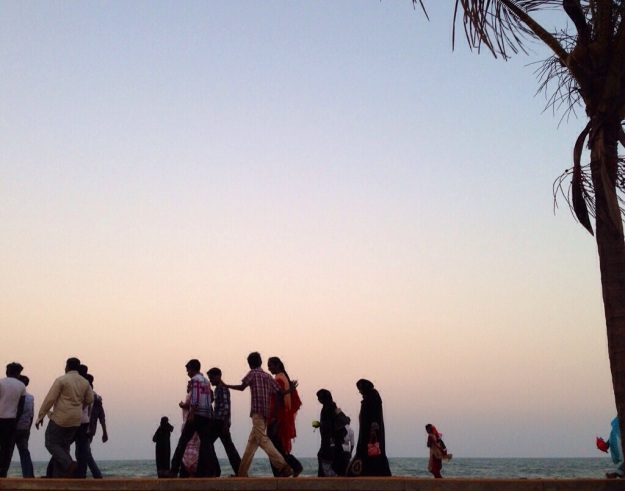